The o7 Show was yesterday and with it came some interesting announcements. 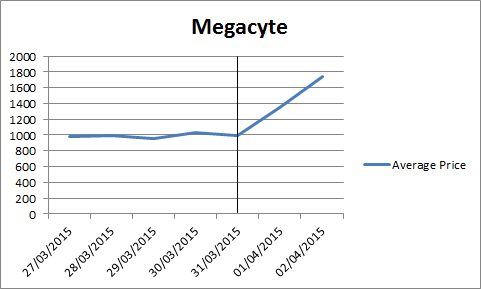 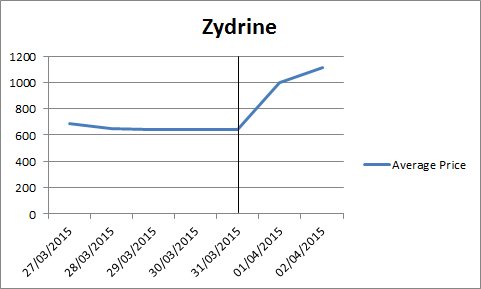 The price of Megacyte jumped up 77% from the prices a week ago and the price of Zydrine jumped by 62%. The base price of these minerals from a week ago were already increased as speculative market trading had caused the price of minerals to increase following the announcement of a shake up in null sec ores at Fan Fest.

I will expect this to be a temporary price spike. With the release of the new expansion, demand for these minerals will increase two-fold, driving up the price even further. However, miners will now obtain a better price for these minerals, with some miners likely shifting their mining to ores containing ample amounts of these minerals to take advantage of the price spike. I would hazard a guess that the price of these minerals will remain elevated going into the next expansion, calming down after the miners have had a chance to catch up. There will be a dev blog coming next week on the changes to null sec ores and mineral ratios, so keep an eye out for that. I'll post another analysis when I see that.

CCP also announced that T3 destroyers are going to be receiving a nerf to their powergrid and speed and will now cost more to produce. T3 destroyers will now cost one additional each of Electromechanical Interface Nexus, Fullerene Intercalated Sheets, Optimized Nano-engines, Reconfigured Subspace Calibrator, Self-Assembling Nanolattice, and Warfare Computation Core. Seeing as how the supply of these materials is unlikely to change significantly, the increased demand for these items will drive up their costs, leading to more expensive inputs into T3 destroyer manufacturing and higher prices of T3 destroyers in the short term. Indeed, market data shows that the price of T3 destroyers has jumped almost 7 million ISK already today, reflecting the rush of manufacturers trying to stockpile inputs and subsequently driving up the prices of their own inputs. My advice: if you want a new T3 destroyer, buy it sooner rather than later. The price will continue to rise until the market stabilizes.

Finally, the Entosis Link module will be available to manufacture soon, although I was unable to find information on what it will take to build it. Since we can expect that large null sec alliances will be stockpiling large numbers of these modules, I will be interested to see what the inputs to production will be. CCP predicts that the cost will be 20m for the T1 and 80m for the T2 version, however the initial prices are likely to be higher as the new demand for inputs will drive up the price of raw materials until suppliers adjust to the new demand.

We also have some nice new changes coming such as the ability to launch a control tower from a fleet hangar (I talked about how stupid it was that you couldn't do this when setting up my reaction tower). This is a great quality of life change. The expansion on April 28th will bring some interesting changes!
Posted by Unknown at 09:39