Obviously that is a not just a bad fit, it's horrific. But the guy might not know any better. We get these all the time circulating social media and corp/alliance chat. How do we educate players on fitting? This guy has been playing four months and can fly a BC, but has no idea how to fit one. What could be done to help bro's like this? 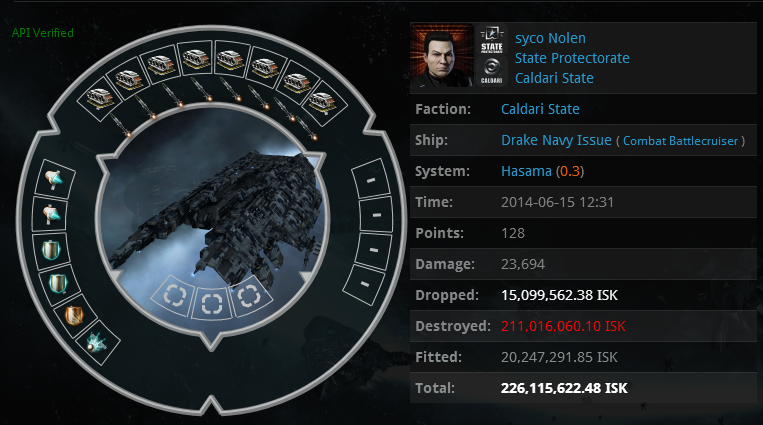 EVE can be a complicated game for people coming from other MMOs. Other MMOs don't have the risk that EVE does, so fitting your ship with the best of the best isn't the best idea. We've all seen the killmails posted on Reddit of multi-billion dollar losses for ships that should never have been that expensive. And then you have fits like the above, and you wonder where people get their fitting advice from.

The fact is, EVE is a game about doing research. It's inefficient to try to come up with your own fits unless you're experienced enough to know what you're doing and know what you're giving up when you add that other module in place of another. But, these fits need to be found and for that you need to go on Google and look for them. This is in stark contrast to other MMOs, where newer items are always better than older ones and you should put them on right away without consideration of how they interact together.

I look at the fit above and again, this just comes right around to the new player experience. Obviously, the game has failed in some way to teach him how to fit. When you think back to how you learned how to fit your ships, it wasn't the tutorials that really let you know how to fit your ship. It was people you encountered, it was people posting their fits in the Rookie chat, it was people in your corp giving you advice or links to different pages (like EVE University's wiki page).

How do we help people like this? I think these "people" fall in to different categories; some can be helped and others cannot.

This is a new player who's ready and willing to learn, but might need to be pointed in the right direction to find the resources that they need to learn how to fit ships properly. They don't think they know better than you, and they've already learned that more expensive does not mean that they should be fitting it. These types of people are excellent candidates for joining learning corporations like EVE University (yes, I'm plugging my own corp, shut up).

This person mistakenly assumed that EVE is a game that you can pick up and start playing without having to consult materials outside of the game to learn how to play. One prop mod makes you go fast, so two obviously makes you go faster, right? What do you mean I can plug resistance holes with my lows? It's not that these types of people can't be helped, they just need to become aware of the resources around them. They need to be pointed towards wiki pages with fittings or join a corp with friendly members who can give feedback on fits. Or they need to join a corp that runs doctrine fleets so that they're told specifically what to fit so there is no room for error. Just because they're clueless does not mean they're helpless, that's the next case.

3. The "I know better than everyone" Newbro

This person cannot be helped. This is the type of person who thinks that they know everything about everything and they're going to fit two prop mods because reasons. They can post their fit, hear about how bad it is and just ignore it because even though they've only been playing for a short while, they know the game better than someone who has been here for years.

4. The "mountains of ISK" Newbro

This might not apply in this case, but as I mentioned at the beginning, we've seen cases of people who just buy a bunch of PLEX and fit their ships with a whole bunch of faction mods and then get lossmails that end up on Reddit. This person might be a combination of clueless and "I know better than everyone", but really they fall into the category of "I have a bunch of money that I'm willing to drop on the game and don't care if I lose expensive ships". I might also call this type of player "stupid" but that's just me.

The blog banter included some additional questions as well that I'd like to answer:

Furthermore, what (if any) responsibility do veterans players have in finding these players and instructing them on the finer arts of ship fitting? If it exists, does it extend beyond them into teaching PvP skills, ISK making skills, market skills, social skills, life skills...

First of all, veteran players don't have any responsibility in finding these players and educating them on how to fit their ships. However, EVE is a great game where people will go out of their way to help others as long as they're willing to be helped. How many times have you seen someone gank someone and follow it up with a convo to discuss how they could have done better, or what they should try next time? Not everyone is receptive to these types of things, but if they are, they can learn a whole bunch.

As someone who is in a learning corp, we have a bunch of players who have taken it upon themselves to educate these players and give them advice on ship fittings and other things. Certain things can be taught, passed down from older player to newer player, and paid forward when the time comes. EVE University is full of these types of things. Old players move on, new players take their place as teachers and pass along knowledge to new players where they can. It's a fantastic model, and it's clearly working. The best of the best corporations come to us to recruit, because they know our graduates have learned these skills or at least, have the capacity to learn.

And another question you can think about is this: do purposely wrong fits, aka comedy fits or experimental fits or off-meta fits, offend you or your corp? Would you, like Rixx Javix when he was in Tuskers, face expulsion for fitting your ships differently than the accepted standard?


Heh, no, these types of fits don't offend me and don't offend my corp. There's something to be said about learning by doing, and experimenting is one way of learning how to fit your ships. If you play around with different modules to see how it impacts your ship, you learn quickly what you need and what you don't. Experimental fits and off-meta fits don't bother me, because it's these people who might find the next great fit. Comedy fits? Who cares? If someone wants to mess around, all the power to them. It doesn't affect my game, other than potentially having one additional target in w-space that will be easy to kill.

All in all, veteran players passing down their knowledge to new players is a great way to ensure that there are new players to fill the shoes of older players who leave the game. But, the key is having new players who are willing to learn, willing to accept feedback and willing to put in the time to do some research and learn about why they're fitting their ship in this manner. Some corps exist out there that provide a platform for new players to learn how to fit their ships, too. But some players will have to learn by themselves, maybe because they're stubborn or maybe because they truly just don't know better. But I can imagine that the person who killed the guy above sent him a convo afterwards to give him fitting advice. And that's one of the great things about EVE, people are willing to help. The question is, was he willing to listen?
Posted by Unknown at 08:26