As promised to Kirith, this post will be investigating the use of PLEX as an investment vehicle. I find this to be an interesting topic as I have read other bloggers, like croda, are using PLEX as a cash sink when they have too much ISK to use in their daily activities.

Let us start with the usual caveat that my results are based on the validity of the data that I am using. I am using EVE Market Data, and I have no reason to believe that the information isn't solid (unless you guys tell me otherwise). 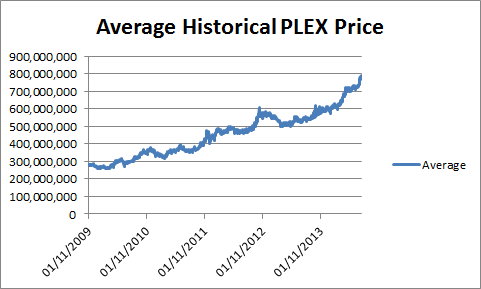 On Friday, I analyzed the recent increases in PLEX prices and attributed it to a number of factors, including suppliers declining at a faster rate than buyers and market correction. There is no doubt that if you invested in PLEX as early as a few months ago, you have earned a tidy profit thanks to the rising PLEX prices. It is clear in the graph above that PLEX prices have historically been trending upwards since 2009 at least, as that is the earliest data that I can collect.

One of the things that stands out to me immediately is that there is evidence of recurring seasonal variation in the historical PLEX prices. Indeed, approximately every 6 months, PLEX prices spike and settle back down again. If you take a look at the dates, the spike in PLEX prices coincides with the release of previous expansions (in November and May, generally). However, after the expansion, things settle down and prices fall, often lower than what they were just prior to the expansion. For an example, let us take a look at the period from November 2012 to November 2013. 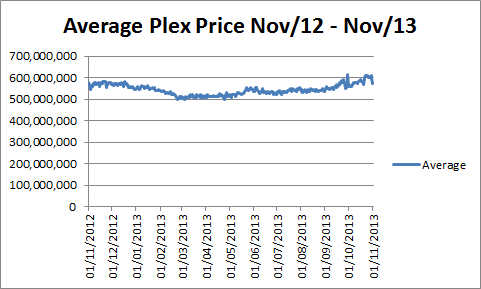 This time period is a great example of the seasonal impact of expansions on PLEX prices. If you purchased PLEX in November of 2012, you will have made a loss selling it at any point prior to November 2013 (maybe late October, if you were lucky). In this case, you can see that the mid-year expansion in May did not have enough of an impact to bump prices up above the levels in November 2012.

Now investing in real life is important because of inflation. A dollar that you had a year ago does not have the same value today because prices have been increasing across all commodities that you buy. Therefore, people choose to invest idle money so that their money grows and hopefully matches or outpaces inflation. In EVE, there is no inflation built into the system. Rewards from missions and selling blue loot to NPCs always gives the same amount of ISK, and prices for manufactured items tend not to find themselves constantly rising unless forced to by external factors (like a CCP expansion).

So the question is, why do people in EVE feel the need to invest? For one, idle money isn't growing. If you're a trader or manufacturer, you put ISK into buying goods that you turn around and sell at a higher value. In this type of situation, your ISK is making you more ISK based on what you're doing with it. So I'm guessing that people who are used to taking a certain amount of ISK and making more ISK with it don't like the idea of having just sitting ISK. I know as a trader myself that ISK sitting in my wallet is not earning me any money, and therefore that is a waste.

Now, to the topic of using PLEX as an investment vehicle. PLEX is one of the few items (that I can tell) that has seen such a pronounced upwards trend in price. As a result, it has been a fairly safe long-term investment for anyone willing to hold on to it for a long enough period of time. Additionally, since it is so expensive to purchase, it can quickly eat up that idle ISK, which I imagine makes the process of getting rid of idle ISK quite easy.

My main concern about PLEX prices now with regards to investment is that since CCP has switched to the 10 expansions a year release cycle instead of 2, we are not likely to see major spikes in PLEX prices around expansions like we previously did. Take a look at the small increase in the price of PLEX in May of 2012 and this is the type of modest increase we might be seeing in the future.

If I were a PLEX investor, I'd be concerned about the new release cycle from CCP. The lack of big expansions bringing in a bunch of people to the game (and therefore driving demand for PLEX up bringing prices along with it) means that PLEX prices might just stabilize in the not too distant future. As I mentioned in my last post, I believe that PLEX prices will still be increasing in the short run as the market equilibrates. After that, however, it's possible that the new release cycle will flatten price changes in PLEX. If true, this will mean that anyone buying PLEX in the short to medium run could be finding themselves losing ISK as opposed to gaining ISK.

Now, to finish off this blog post, let's take a look at the current state of affairs leading up to the release of Crius, that will be happening tomorrow at downtime. 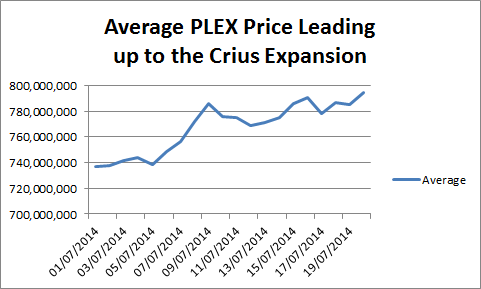 It's pretty clear that over the past three weeks, PLEX prices have been steadily increasing. With the imminent release of Crius, it's possible that people are buying PLEX to keep a supply of ISK steady and stable because they're not sure what is going to happen to the prices of manufactured items. 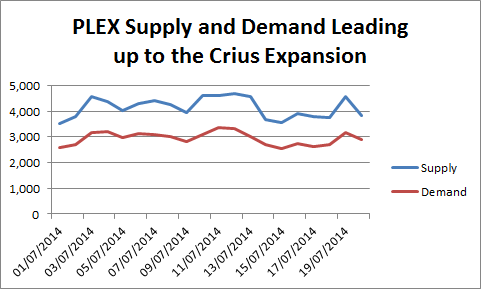 Interestingly, however, there are no prominent changes in demand or supply, meaning that the current spike in prices is happening due to speculation rather than market forces. This shows you the pure power of speculation on prices in the PLEX market, which would also concern me if I were a PLEX investor as the same type of speculation can swing prices downwards, too.

All in all, PLEX has been a solid choice for investing ISK over the past several years as long as you were willing to wait and hold onto them before selling. Now, with the changes to the release cycle of expansions, the impact on the PLEX market might not be as noticeable as it was before. For small expansions with little to no new content, we could see stable or declining PLEX prices as opposed to spiking PLEX prices that we observed before. Ultimately, PLEX investors had better be keeping a finger on the pulse of the market, because the status quo before has been shaken up thanks to CCP, and that is going to affect the bottom line.
Posted by Unknown at 08:35